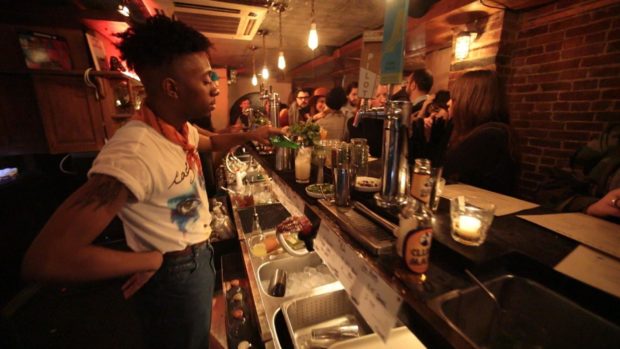 Sober bars are starting to take the streets by storm, offering a variety of lavish mocktails and bar-like social atmospheres. The sober curious movement is becoming a popular trend among heavy drinking cities, such as New York and London, as a healthier alternative to getting drunk on a weekend night. This movement is not only in the popup bars, but sober social clubs are now meeting up at regular establishments, enjoying the music, dancing, and ordering from an array of mocktails and non-alcoholic beverages from the bartender. These sober bars or sober-friendly options are not meant to replace bars, but to merely be an alternative for non-drinkers that are looking for a social environment to mingle.

Listen, a popup bar in New York is 100% alcohol-free, which offers a bar-like ambiance, high-end mocktails, and a friendly open environment for non-drinkers to socialize. The founder of the popup establishment wanted a place for people to feel comfortable and enjoy social engagements without feeling pressured to drink. “Alcohol has a monopoly on how we socialize,” says founder Lorelei Bandrovschi “when we meet for drinks, is it really about how much alcohol is in those drinks? I don’t think it has to be.” With the sober curious trend that is starting to become more socialized, places like Listen are at max capacity at night. “Being dry is something encouraged and completely casual.”

Are Sober Bars the Future of Sober Socialization?

These bars were not created to be a replacement from alcoholic bars, but for people to take a break from drinking. A study from 2017 reveals that 65.3 million people aged 12 and older binge drink; however, Millennials and Gen Z are drinking 20% less than the generation before. Heineken researched their new alcohol-free product Heineken 0.0 and found that nearly 30% of 21-25-year-olds haven’t had a beer in the past month. Nonalcoholic beer is projected to double to about $25 billion by 2024. Liquor-free distilled spirits are also growing in popularity, with Seedlip being the pioneer of nonalcoholic spirits.

Those that are binge drinkers can’t always stop and abstain from alcohol for a couple of months. Over 15 million Americans have or had, at one point, an alcohol abuse disorder. Chris Marshall from Austin, Texas, is one of those Americans. He started drinking in high school and progressed his habits while in a fraternity in college, saying, “All my drinking was really centered around community and wanting that connection so badly with other people.” After seeking help from Alcoholics Anonymous, now on his 12th year sober, Marshall found that he was loneliest during the early days of sobriety. In turn, he created Sans Bar.

Sans Bar is a sober bar originated in Austin, Texas and is now popping up in cities across the country. The bar is intended to be a comfortable place to mingle, make sober friends, listen to music, and drink nonalcoholic drinks. “What I want to create across the country are these little incubators for social connection,” Marshall says. Through his journey, he has noticed that “Not everyone identifies as sober all the time,” with a spectrum of sobriety. Marshall welcomes any all people who are in recovery to Sans Bar, even those that are just testing out sobriety in the “sober curious” movement.

The sober curious movement stemmed from Ruby Warrington’s book Sober Curious: The Blissful Sleep, Greater Focus, Limitless Presence, and Deep Connection Awaiting Us All on the Other Side of Alcohol, which was released last December. The movement is for people to focus on social engagements that don’t involve alcohol, a “party sober” if you will. This movement is not only for the strictly sober but is celebrated by many that just want a break from alcohol. Some sober social clubs started with “Dry January” and “Sober September” and are finding how much healthier they are when they replace alcohol at social functions. After taking a couple of months off from drinking, social club member Kathy Kuzniar, started to find benefits of being sober and the results are addictive saying, “I’m creative again,” and “feeling calmer and healthier” – losing 30 pounds since she became sober.

Bandrovschi from Listen knows that social media plays an influential role in Millennial and Gen Z populations, focusing on social events and photo-friendly environments and drinks. Apps like Loosid organize sober events for people to interact with a community of non-drinkers. Actress May Calamway confesses that she was drinking for others – she drank in social situations “so that others wouldn’t feel uncomfortable.” “You know, alcohol is the only drug in which you have to give a reason for why you don’t do it,” Marshall divulged. With new sober friendly options like sober bars, alcohol-free spirits, and beers, and mocktails, social situations don’t have to be dominated by alcohol anymore – people can enjoy socializing without the need to consume alcohol.