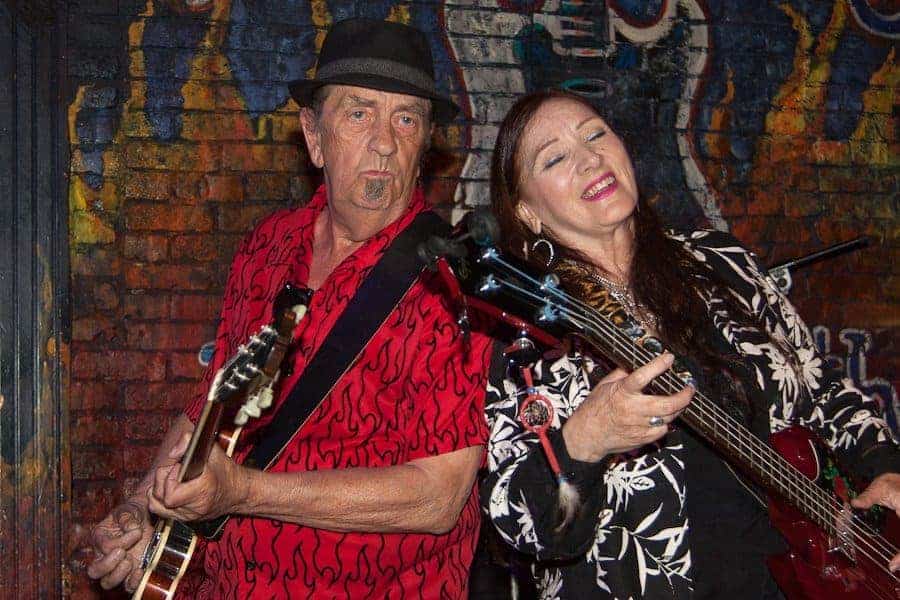 If there’s one woman who has earned the title of “Ms.”, it’s Connecticut singer/songwriter Marci Chevian-Hooper, known henceforth as Ms. Marci. If you’re lucky enough to ever engage her in conversation, whether it’s about her life, her music, her recovery, her experiences or anything in between, it’s hard not to feel like you’re talking to the First Lady of Modern Blues. Recovery Unplugged had the recent fortune of speaking to Ms. Marci about her exceptional and somewhat unlikely life in music, as well as how it as sustained her recovery. The pleasure was all on our side of the telephone.

RU caught up with Ms. Marci on the night her band, The Lovesick Hounds, was slated to take some new press photos. She was gracious enough to walk us through her life in music and recovery, starting at the tender age of 16: “I started singing and playing in clubs so young. I was in an all-female band in the 60’s when the closest thing to that was the female singing groups, but we played our own instruments.” Originally called the Broad Explosion, the band’s brash and edgy sensibility elicited complaints from many of the club’s owners and regular customers, prompting them to change their name to Peppermint Conspiracy.

This compulsory name-change, however, is where the innocence ended for Ms. Marci and her crew: “I was 16 when I was in this band and we were encouraged to accept drinks from the patrons, so I did.” Ms. Marci credits this kind of early exposure, as well as a dysfunctional family life, with the onset of her substance abuse: “I was raised in foster care and would have it thrown in my face when my foster father was drunk, which he often was, that my biological mother was a drunk and that’s why I didn’t grow up with her. So that’s not the kind of thing you want to listen to as child. Music was a refuge for me even before I took to drugs, but being a musician and being out there in public gave me an open door. People were always offering me drugs and alcohol.”

Ms. Marci describes the moment when she realized she needed treatment as “a really good bottom”. The revelation came to her at 36 after an extended period of bargaining with herself: “I was going around in circles, trying to figure out how I could feel good and not be a mess. I’d tell myself that I’ll just drink and not do pot or take pills, and then the drinking would get out of hand. Then I’d tell myself that I was going to drink, but just smoke some pot.” She goes on to describe a prolonged period of doctor shopping and drug seeking, during which she was looking for a “magic combination” of fulfillment and function. When she was the victim of a violent home invasion, life hit an all-time low and she found herself in a dramatic encounter with an assailant who punched her in the face in the backyard of her Providence apartment.

After going to psychologists for years for her alcohol and drug addiction prior to entering AA, she began making serious progress; progress that she was reluctant to recognize at first. “I had the stereotypical picture of what AA was about: drunk old men sitting around in trench coats, drinking booze out of paper bags.” A man she met at a club one night while she was singing suggested the AA process. Though she was initially resistant to the idea of going to meetings, fate would intervene. After a series of personal crises and a corresponding gin binge weeks after their initial encounter, the man once again reached out to Ms. Marci and took her to a meeting. “He asked me when was the last time I ate something and I honestly couldn’t remember. He picked me up, we stopped for a burger and on the way to the meeting, he read me the AA riot act.” The “riot act” included him urging her to utilize the experience of members with a year or more in recovery.

Although she admittedly needed to “get stoned” before the first few meetings, she eventually started believing more in the process, and reaping its benefits. Like others in recovery, she experienced a setback but was comforted and inspired by the idea of another second chance. “When I got a whole month [of sobriety], I was just on top of the world.” This was in 1986 and Ms. Marci has not looked back since. She celebrated 30 years on October 4th. After 90 days in recovery, she received special reinforcement when she saw Stevie Ray Vaughan, who she knew casually from her performing days, and he discussed that he was coming up on 90 days as well. “I found out later that [on the night of the performance] they did sound check and then went to a meeting, “ confessed an amused Ms. Marci. “Could you imagine being at a meeting and seeing Stevie Ray Vaughan walk in?!”

Ms. Marci says she was more prolific when she was sober and often a “train wreck” when she performed during her 20 years of active substance abuse; however, she has continued to cut an undeniably inspiring path through the national blues scene, rubbing elbows with the likes of Bo Diddley, Muddy Waters, Jimi Hendrix, Chuck Berry, Pinetop Perkins, Jaimoe of the Allman Brothers Band, the aforementioned Stevie Ray Vaughan and countless others. A bass player by trade, she leads her Lovesick Hounds with all the grace, poise and passion you’d expect from someone with her experience and perspective. Ms. Marci has released three original records since starting her recovery and although she took nearly a year off from performing after getting clean and sober, she has continued to write and perform largely uninterrupted since then.

While the specter of substance abuse has been present throughout her career, including one incident in which the drummer in one of her bands got a DUI the night they were supposed to play, Ms. Marci has her feet planted firmly on the ground, and learned early on in her recovery how to balance stage-life with sobriety: “I was very cautious and would only go out to clubs with people who were sober and clean and who could be ready to leave at a second’s notice if I felt uncomfortable.” Initially she was concerned that recovery had deprived her of her muse, but eventually the musical floodgates opened and have remained that way ever since.

At the end of the day, writing and performing continue to be a sense of catharsis above all else for Ms. Marci. Her music is a celebration of life without drugs and alcohol. Despite having her darkest days behind her, she continues to live the blues every day of her life. She first fell in love with the genre through the influence of older siblings and has kept it close to her heart ever since, relentlessly seeking out even the most seemingly obscure artists from the Great American Blues Songbook. We end the interview by asking Ms. Marci to describe the impact that music has had on her recovery and, true to form, her answer inspires and elicits further contemplation: “The music and I are soul mates. When I sing, I get the same buzz that I was searching for so desperately with the drugs and alcohol. It is fulfilling and it gives me what I was looking for when I was getting stoned and drunk.”