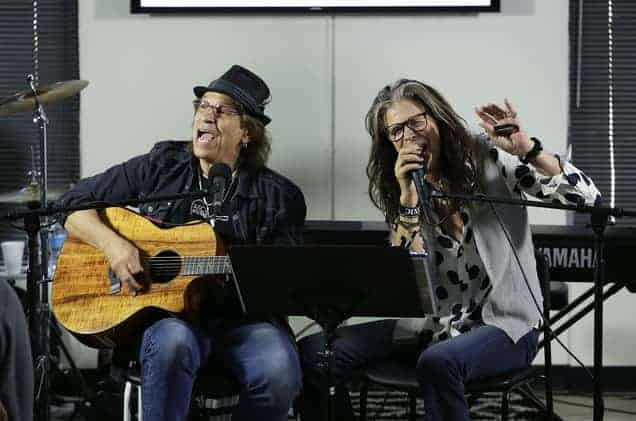 Legends never die, and it’s in that spirit that Aerosmith, the legendary all-American band from Boston, has maintained a residency and is still performing on a regular basis in Las Vegas almost five decades after the release of their debut album. With the same style and flair that has persisted over an illustrious, decades-long career, Aerosmith performed their classic song, “Chip Away the Stone,” this past Sunday at Park Theater. It’s hard to believe that the band has been at it for almost half a century– Steven’s vocals haven’t aged a day, and the entire band brings a special kind of youthful energy with them onto the stage that transports the entire audience back to their heyday.

This Sunday’s performance was extra special, as Steven Tyler’s shout-out to our very own legend, Richie Supa, preceded belting out the classic Richie wrote for them. A GRAMMY Award-winning songwriter, Richie has been friends with Steven Tyler for longer than the two care to admit, collaborating with the Aerosmith front man both onstage and in the studio. He has worked in the past to create a number of hit songs for Aerosmith, including but not limited to “Amazing,” “Lightning Strikes,” “Pink,” and “Chip Away on the Stone.”

Steven Tyler’s shout-out is even more significant because both singer-songwriters have struggled with addiction in the past. Aside from a rich musical history, the two share a bond that comes from walking the road of recovery together. Richie, who is Director of Creative Recovery at Recovery Unplugged, uses his experience struggling with heroin and cocaine abuse during his time working with a record label to help aid others who are fighting with substance abuse. Steven Tyler, who currently has nine years clean and sober, has visited Recovery Unplugged in the past to share his story and to spread the healing power of music with clients.

We’re proud to have someone like Richie Supa on our side. In the words of Steven Tyler at Park Theater, THANK YOU RICHIE SUPA!