Addiction and Bipolar Disorder: What’s The Connection and How Do I Get Help? 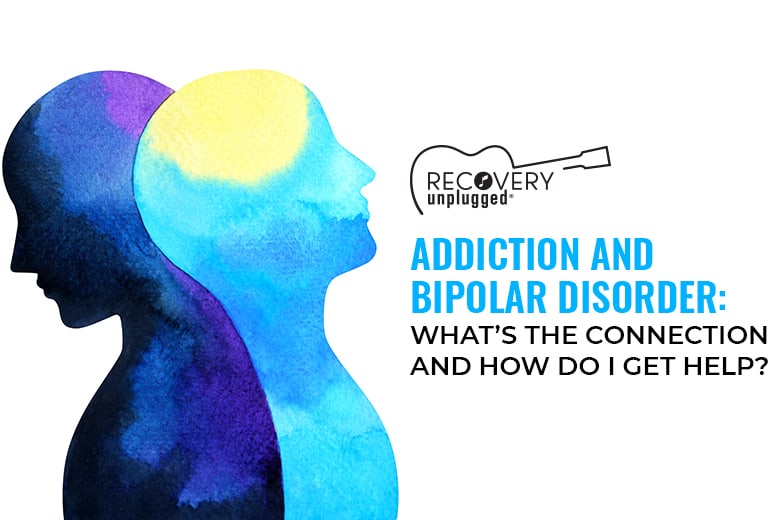 Addiction and Bipolar Disorder: What’s The Connection and How Do I Get Help?

Like other types of serious mental health issues, addiction and bipolar disorder are closely linked. The Substance Abuse and Mental Health Services Administration (SAMHSA) reports that over nine million (nearly four percent) of American adults currently struggle with a co-occurring mental illness and substance use disorder, and the onset and progression of bipolar disorder is one of the largest drivers of this alarming correlation. SAMHSA also reports that 30-50 percent of people who struggle with bipolar disorder (including bipolar 1 and bipolar 2) will develop a substance use disorder during some point in their lives, for which they’ll need comprehensive dual-diagnosis treatment.

Understanding the relationship between addiction and bipolar disorder, including how one condition affects the other, factors that exacerbate the association and ways to get treatment, can help you or your loved one either prevent, independently manage or get help for this complex co-occurring disease. You don’t have to struggle with addiction and bipolar disorder on your own, nor should you.

What Is Bipolar Disorder?

Bipolar disorder (formerly called manic-depressive illness or manic depression) is defined by the National Institute of Mental Health (NIMH) as a mental disorder that causes unusual shifts in mood, energy, activity levels, concentration, and the ability to carry out day-to-day tasks. There are multiple types of bipolar disorder, including:

If you or your loved one are experiencing any of these symptoms, and are not already diagnosed or receiving treatment, work with your doctor or therapist to identify which, if any, type of bipolar disorder you may be facing.

It can be hard to recognize bipolar disorder in yourself or a loved one. Many are unable to distinguish early episodes and symptoms from everyday, ordinary shifts in mood caused by external stressors. It can also be hard for clinicians themselves to diagnose the disease. One 2010 study that as many as 40 percent of people with borderline personality disorder had been misdiagnosed as having bipolar disorder. Some of the primary signs of bipolar disorder can include, but are not limited to:

Substance use is another example of high-risk behavior exhibited during extreme bipolar episodes, a cycle of behavior which, over time, can lead to addiction. This is why it’s best to recognize bipolar disorder early and mitigate any dangerous behavior that can lead to long-term health issues, including those caused by excessive drinking and drug use.

The Chicken and the Egg: Causes and Effects of Substance Use and Bipolar Diagnosis

Patients who experience mania during bipolar episodes are 14 times more likely to have a drug abuse disorder and six times more likely to battle alcoholism. There are multiple factors that drive individuals with bipolar disorder to drink or use drugs, including physiological and experiential. More often than not, however, it’s bipolar disorder that causes addiction and not the other way around. While the neurological side effects of prolonged and untreated substance abuse can create changes in mood that can easily be confused with bipolar disorder, they are usually associated with withdrawal and can often be mitigated with comprehensive medical detox.

What Type of Addiction is Most Common in Bipolar Patients?

Although bipolar disorder is associated with all types of substance use disorder, alcohol is by, far, the most common addictive substance associated with this condition. A comprehensive 15-year meta-analysis published in the Journal of Affective Disorders indicates that 42 percent of individuals with co-co-occurring bipolar 1 and bipolar 2 had alcohol use disorder and 20 percent struggle with drug use disorder.

Treatment for addiction and bipolar disorder must include comprehensive medical detoxification to address complex medical and neurobiological issues associated with substance abuse and the originating disorder, as well as behavioral counseling and rehab to address the root causes and sustaining factors of both the substance abuse and the bipolar diagnosis. Just using medications isn’t enough and can actually be very dangerous to long-term cognitive health. At the same time, standard counseling and therapy might not be enough to rebalance the changes in brain chemistry that you or your loved one have experienced during your journey.

Treatment facilities that provide dual-diagnosis care for alcohol or drug addiction and bipolar disorder are your or your loved one’s best bet for getting the help you need. Doctors and therapists at these facilities understand the complex and delicate relationship between these two conditions and how they can co-exist with the other to become one intermingled health problem. Dual-diagnosis programs offer access to medically supervised withdrawal management to ensure your body and brain are stabilized, and your neurochemistry is rebalanced after prolonged, untreated substance use.

After detox and withdrawal management, rehab can offer a variety of helpful clinical interventions, such as group therapy, individualized counseling and supplemental therapies like cognitive behavioral therapy (CBT), motivational interviewing, dialectical behavioral therapy (DBT) and much more. Recovery Unplugged offers these evidence-based interventions, while using music to help clients more readily embrace the treatment process. Music has been shown to help effectively treat many symptoms of bipolar disorder, including depression, anxiety and mania. We use these benefits to help you or your loved one feel better about getting addiction help.

It’s easy to feel like you’re alone when you’re struggling with alcohol or drug addiction and bipolar disorder. It can feel like you don’t know what’s going on in your own head, how to make sense of it or how to keep it from killing you. The first step toward reclaiming your health, dignity and quality of life from this complex, inter-connected illness is by acknowledging the existence of a problem in the first place. Talk to a friend, loved one or mental health professional about what you’re experiencing and come up with a plan to start a course of care.

While World Bipolar Day is a reminder that there is no shame in asking for help for drug addiction, and that there is actually strength in it, this reality shouldn’t be forgotten when the day is over. If you or your loved one need help with co-occurring addiction and bipolar disorder, contact Recovery Unplugged now to start your treatment today. We accept most major insurances and have multiple facilities across the country. Our admissions representatives are standing by 24-7 to help you with your alcohol or drug addiction and bipolar disorder.