Dangers of Mixing Drugs and Alcohol: A Guide for At-Risk Users and Families 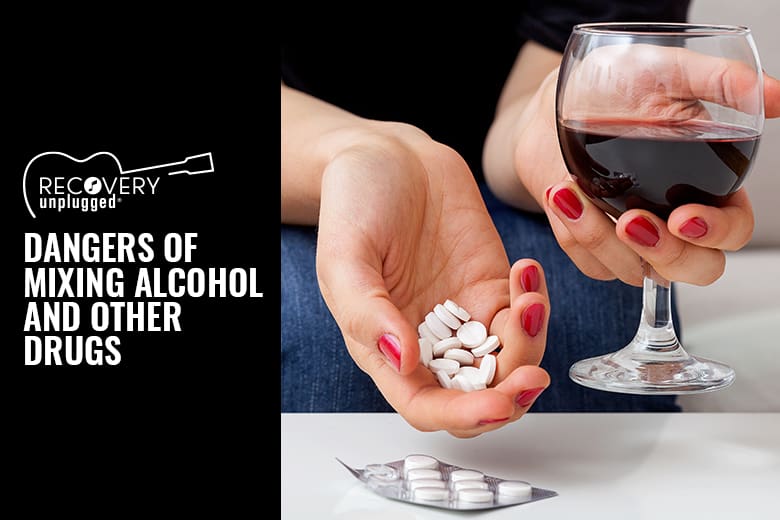 Dangers of Mixing Drugs and Alcohol: A Guide for At-Risk Users and Families

Whether you’re going through substance use disorder yourself or you have watched a friend or family member struggle with addiction, you probably know how common it is to mix drugs and alcohol. Data from the Substance Abuse and Mental Health Services Administration’s (SAMHSA) 2019 National Survey on Drug Use and Health indicates the over 10 percent of those who struggle with substance use disorder (SUD) battle simultaneous alcohol and drug abuse. If you or someone you care about are among these startling numbers, you need to know about the dangers of mixing drugs and alcohol and how it can significantly increase the likelihood of worsening addiction…and even fatal overdose.

Why Do People Mix Drugs and Alcohol?

There are many different behaviors that drive people to mix alcohol and illicit drugs, including but not limited to:

This level of impaired judgment can be more dangerous than you or your loved one may realize. Data from the Centers for Disease Control and Prevention indicates that overdose deaths involving polysubstance abuse is on the rise, partially because victims are unaware that they’re taking a certain drug. This lack of awareness can stem from dealer deception or from lack of control due to intoxication. The dangers of mixing drugs and alcohol vary, depending upon what substances you’re using.

Dangers of Mixing Alcohol with Benzos

One of the most common and deadly forms of co-occurring drug and alcohol abuse is mixing alcohol with benzodiazepines (benzos). As previously stated, doctors often prescribe benzos like Valium® or Librium® for serious alcohol withdrawal symptoms, like seizures. Unfortunately, however, even with the use of these drugs, it’s possible to experience relapse.

Both alcohol and benzos are central nervous system (CNS) depressants, otherwise known as downers. They both work by regulating the neurotransmitter gamma aminobutyric acid (GABA) to help reduce stress and promote calmness. Unfortunately, this process includes slowing down your breathing and heart rate, which means that you’re taking two substances that decelerate heartbeat and respiratory function at the same time. Many who succumb to benzo overdose have alcohol in their systems at the time of their death.

Dangers of Mixing Alcohol and Opioids

Data from Pew Research Center indicates that 15 percent of opioid fatalities involved alcohol in 2017. With the rise in drinking, as well as opioid deaths, amid the COVID-19 pandemic, this number has likely only gotten larger. They also report that around 23 percent of people with an opioid use disorder have a concurrent alcohol use disorder.

Like benzos, opioids like oxycodone and hydrocodone work by depressing the CNS, in this case, blocking the perception of pain to the brain. Both alcohol and opioids lower blood pressure, slow reflexes and decelerate breathing, which means compounded use of each substance can be, and often is, deadly. Opioids are not meant to be a long-term solution to pain, and it’s best to refrain from drinking while on a prescription for narcotic painkillers. Talk to your doctor about any concerns you have with any side effects of opioids you are experiencing.

Dangers of Mixing Alcohol with Heroin

The risks of mixing alcohol with heroin mirror those of simultaneous drinking and opioid use, slowing down breathing and respiratory function and heart rate to the point of unconsciousness and possible fatality. What is, perhaps, even more alarming than any other type of drug association is that those who abuse alcohol are twice as likely to develop heroin addiction at some point in their lives, according to data from the Centers for Disease Control and Prevention. The agency also reports that heroin users are 15 times more likely to use cocaine and 40 times more likely to have used prescription painkillers.

Dangers of Mixing Alcohol with Cocaine

Mixing cocaine and alcohol is alarmingly common at parties and in social contexts, particularly among young adults. The CDC reports that cocaine is involved in nearly 20 percent of all overdose deaths, and many who overdose from cocaine have alcohol as a co-occurring risk factor. Mixing cocaine and alcohol produces a separate chemical called cocaethylene, which can increase the risk of toxicity of the heart and other major organs. Prolonged and untreated simultaneous cocaine and alcohol use can lead to a variety of other serious health effects, including, but not limited to:

Simultaneous cocaine and alcohol use also increases the likelihood of ER visits and emergency hospital admission.

Getting Treatment for Combined Alcohol and Drug Use

In order to manage the complicated and interconnected physical and behavioral effects of co-occurring alcohol and drug use, you or your loved one should seek comprehensive medical and behavioral care. Treatment for alcohol and/or drug addiction should include medically supervised detox and withdrawal management to address the complex long-term medical issues associated with protracted drinking and drug use, as well as compassionate and supportive behavioral rehab for the psychological origins and triggers of substance abuse. Simultaneous drug and alcohol abuse requires targeted and in-depth management of each associated condition for comprehensive healing, and should be tailored to your individual care needs.

It may seem impossible to envision your life without drugs and alcohol to help you feel “normal”, but there is nothing normal about an endless cycle of pain, sickness and dysfunction from withdrawal and relapse; nor is there anything normal about the legal issues, relationship damage, disease risk and financial destruction often linked to drinking and drug use. When you mix alcohol and other drugs, you compound the immediate and long-term dangers of substance use and increase your potential risk of overdose fatality.

Recovery Unplugged is ready to help you or your loved one reclaim your health, dignity and quality of life from drinking and drug addiction. We accept most major insurance plans and offer all levels of care, including medical detox and inpatient rehab. Contact us today to get help at one of our locations across the country. We’re waiting to guide you toward recovery and a better future.