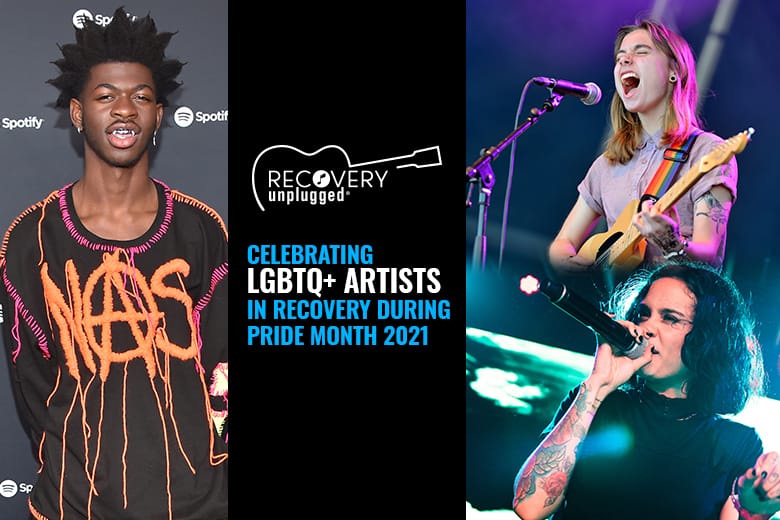 As Pride Month 2021 rolls on, Recovery Unplugged continues the celebration by highlighting some of the most innovative and inspirational LGBTQ+ artists in recovery. It’s no secret that trauma related to sexual orientation and gender identity can directly influence substance use disorder. These artists have found ways to channel this adversity into honest, confessional and, at times, tongue-in-cheek works and insights. Let’s look at some of the most prolific and outspoken LGBTQ+ artists in recovery.

If we’re putting together a time capsule to preserve artifacts from the last five years, it would be very hard, if not impossible, to leave a recording of Lil Nas X’s “Old Town Road” out of it. At the height of its popularity, the song was absolutely everywhere, winning a slew of awards and invading the heads of Americans everywhere. It was also at the height of the song’s popularity, that Lil Nas X came out as gay, defying conventions in both hip-hop and country music culture…cuz…ya know, writing a global earworm before he was 20 wasn’t enough to distinguish himself.

The artist recently discussed using drugs as a means of coping with personal loss in his life, and his 2019 single “Care for You” his part love letter and part cautionary tale about how addiction affects the family. Lil Nas X has also been very public about his mother’s ongoing battle with addiction, saying that although it’s strained, there’s still love there.

Indie powerhouse Julien Baker is 25 going on 50. Her confessional, wise-beyond-her-years style is fueled by her experiences with addiction and recovery. Baker is a lesbian whose tense and difficult relationship with her Christian upbringing are a recurring theme within her songs. Her song “Little Oblivions” is a raw and unflinching look at her journey of recovering from addiction in a religious household, including her experience with relapse.

Kehlani embodies the modern-day fluidity of sexual identity. The singer clarified that she was queer, and exactly what that meant to her, in a series of 2018 tweets after rampant speculation and questions from social media followers. In addition to battling rumors from the Twitterverse, Kehlani has also battled substance use and mental health issues, including an apparent suicide attempt amid rumors of her infidelity on, you guessed it, social media. Despite these struggles, Kehlani says she “gave up the green and the alcohol” and, as of a June 2nd tweet, hadn’t drunk alcohol in nine months.

We end things with a lesser-sung hero of the LGBTQ+ addiction recovery movement. In October of last year, queer LA-based singer-songwriter, Kat Hamilton released her debut record Recovery Songs. The album is an inspiring and painfully autobiographical portrait of her own experiences with addiction and recovery, and a love letter of acceptance and validation to the queer community: “My hope was that these songs would affect people, but especially people in recovery, because I have a lot of gratitude toward the process, and a lot of ways I want to give back,” Hamilton said of the record.

Proceeds from Recovery Songs were donated to The Trevor Project, a non-profit dedicated to preventing suicide among LGBTQ+ youth. But Hamilton didn’t stop there. Earlier this year, she released Recovery Friends, a compilation of remixes of her original material reimagined from artists across the country in their own unique way.  Proceeds from that release will continue to support the Trevor Project.

These artists not only represent a new level of hope and support for the LGBTQ+ community, but they also serve as an example of how music can drive profound change and improve the lives of others. Recovery Unplugged wants every member of this population who is struggling with addiction to know that they’re loved, valued and supported. We offer specialized Music-Assisted™ addiction treatment for LBGTQ+ clients to help you break down barriers, confront your trauma and heal in a safe and holistic way. Don’t wait another second to get the help you need.