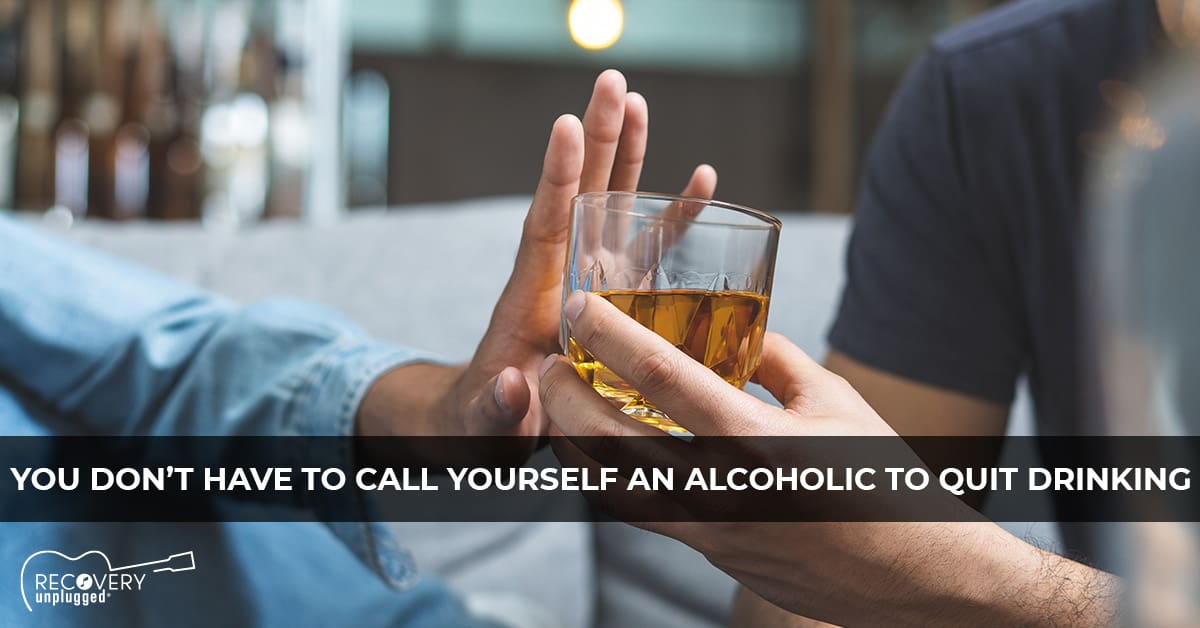 Drinking alcohol is normalized in today’s culture, and it’s weird if you don’t do it. Regardless of your reason for ditching the booze, your life will improve.

The stigma of not drinking

There’s a stigma associated with not drinking. Society thinks you need to lose your marriage, get a DUI, and go to treatment. We’re taught that drinking is what we do in every situation.

Can you think of any TV shows or movies where the character wakes up one day and decides to quit drinking for their overall health and well-being?

There are no rules when it comes to quitting drinking. And you don’t have to label yourself if you don’t want to.

You don’t have to call yourself an alcoholic to quit drinking.

People have many different reasons for quitting drinking. Labeling yourself as an alcoholic is not necessary to accomplish that goal.

This isn’t meant to take anything away from those who identify as alcoholics; actually, quite the opposite. It empowers more people to ditch the booze and lessens the stigma associated with not drinking alcohol.

Getting alcohol out of your life can improve relationships, career opportunities, and overall wellness. Regardless if drinking was a problem for you, the benefits of not drinking speak for themselves

Alcohol is a depressant. That’s why it makes us feel relaxed and less anxious after we drink it. When that feeling wears off, the emotions that caused us to drink in the first place remain. For many, it’s a vicious cycle.

Quitting drinking isn’t a quick fix for your mental health, but it’s a great place to start. Without alcohol, you have a clear view of what you need to work on, and you can focus on your goals. You’ll be more motivated to set up that therapy appointment you’ve been putting off.

An obvious benefit to not drinking is that you won’t be spending money on alcohol anymore. If you’re drinking three days a week and spending $20 per day, that equals over $200 per month spent on booze alone. And that’s a conservative estimate for many people.

You might think alcohol helps you drift off to sleep peacefully, while in reality, it ruins the kind of sleep necessary for you to function properly.

A 2013 study found that the initial sedating effects of alcohol disappear after a few hours. This causes disrupted sleep throughout the night.

In addition to getting more restful sleep, not drinking may inspire you to go to bed at a decent time and wake up earlier. This simple habit change can lead to a trickle-down of positives for the rest of your day.

As your priorities change, so do your relationships. And it’s natural for some friendships to drift apart.

Your head is clear, and you’ll remember the things you say and do. Without alcohol, you can mend broken relationships and create healthy boundaries for yourself.

The cultural shift of not drinking

Many celebrities are opening up about their choice to live alcohol-free. Not only is this motivational, but it also does wonders for the sober community.

Seeing celebs speak candidly helps to reduce the stigma. It proves you don’t need a rock bottom moment to prioritize your wellness.

Drew Barrymore told People magazine, “It was something I realized just did not serve me and my life.” She describes her last two years of not drinking as “liberating,” and she’s not the only one.

In an interview with CBS News, Jane Fonda said, “I only have so many tomorrows left; I don’t want to be at half mast for any of them.” The actress notes that alcohol has affected her differently since she aged. She decided to quit drinking in her 80’s.

To label or not to label? That is the question.

Call it what you want to call it; not drinking means your overall wellness is better.

But it’s human instinct to want to put a label on something. Since civilization began, humans have used this automatic categorization for primitive reasons: to distinguish predator from prey.

Our brain automatically goes into categorization mode to organize and simplify our worlds. Hey, thanks, brain!

When we stop drinking, we feel pressure to call ourselves “sober,” an “alcoholic,” or an “addict.” But labels aren’t required.

If you stop eating hamburger meat, do you suddenly need to call yourself hamburger-free? Are you a recovering hamburger eater? That’s up to you.

Label yourself what you want, or don’t call yourself anything at all. You can state the facts, and that’s enough. You’re a person who doesn’t drink.

If you want to call yourself something special, here are some ideas:

Although it’s none of their business, your not drinking might come up with those around you. It’s alcohol’s world; we just live in it.

To avoid the awkward pause when someone asks, have something prepared. Here are some ideas:

No thanks, I don’t drink. (It’s that simple)

It doesn’t matter whether you quit drinking because it’s a problem or because you just want to focus on your health. It’s a personal choice for everyone. Do what feels right to you.