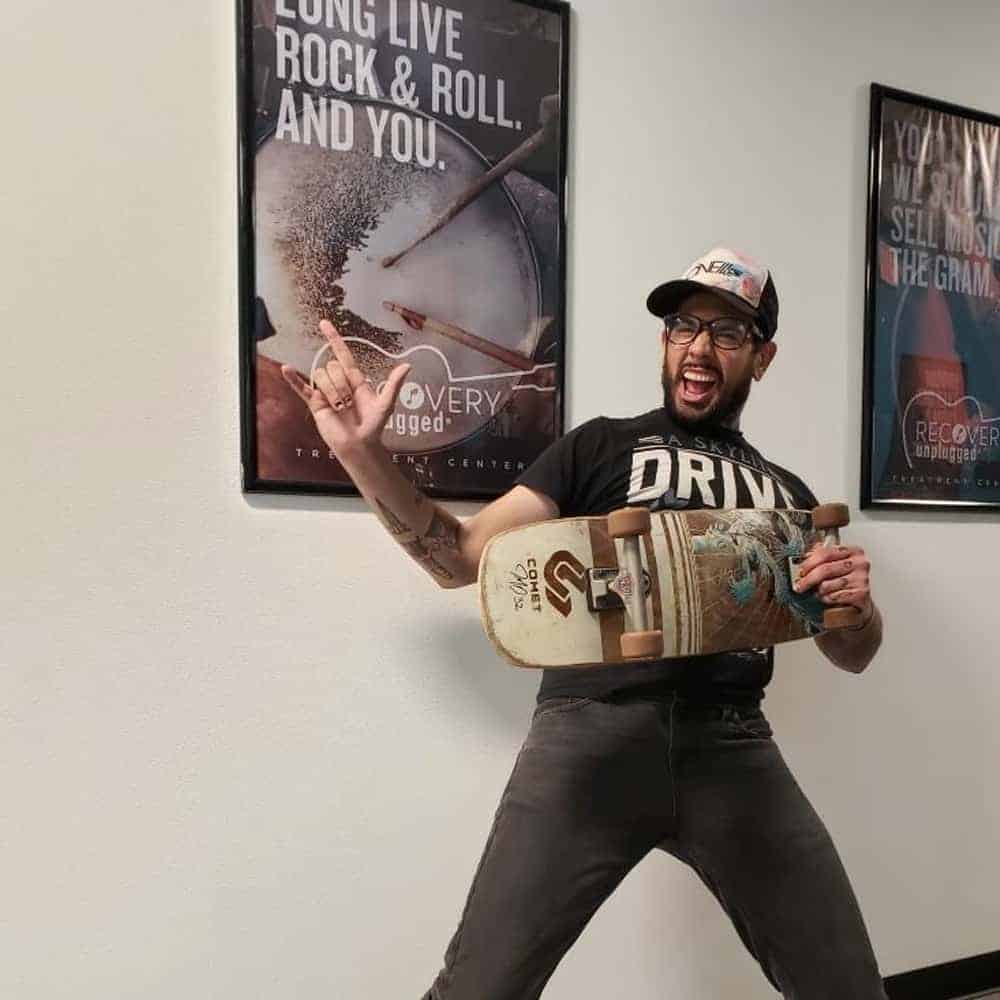 My name is Michael and I’m 35 years old. My clean date is March 9, 2020. I’m originally from Cleveland but have lived in Austin for six years.

I had a very stable and loving childhood. I never went hungry and always had clothes on my back, but I never felt good enough for anybody. I saw the world in a different way. I saw adults treat people one way, and then talk bad about them when they weren’t there. There was a lot of lying and manipulation that I saw in adults. I wanted to grow up and not be a kid anymore because I wanted to be respected and included; but then when I saw what adults did, I didn’t want to be an adult anymore either. I struggled internally with identity. I also got bullied a lot in grade school and middle school, and that was probably the most traumatic thing that happened to me in early childhood. But I kept it all to myself, and never told anyone what I was feeling or going through.

I was 15 when I first drank alcohol, and it was the greatest thing that had ever happened to me at that point in my life. The people I was drinking with were laughing at my jokes, girls wanted to sit next to me and talk to me and people wanted to hang out with me. It was like I had discovered the thing I had been looking for my whole life. I wanted to be the guy who was associated with drinking.

I was 16 when I got my first fake ID. This gave me instant popularity. Despite being friendly with all the cliques in high school, I never really fit in with any of them. I associated alcohol with being accepted. I got through high school without any consequences. I had started driving drunk from the moment I got my license, I crashed a couple of times, and even drove “black-out” drunk---no consequences.

When I was 19, I was partying in the suburbs of Cleveland and I got my car stuck in the snow after leaving the party. I had left because I was feeling depressed about a girl who didn’t want to date me, if I remember correctly, but when the cops got there, I made up all these stories about what I was doing there at 2am. A lot of my past has been like that actually: I’ll lie to myself about the reason why something happened so much that I believe it and then others believe it as well. I perpetuated this giant lie for most of my life.

That night I got arrested, went to jail, got an attorney and they somehow got me out of a DWI. Feeling like I got out of that made me feel like I always could…so it didn’t phase me. I went to court, went through the motions and continued to drive drunk all the time.

At this point, I was doing all the things I thought you were supposed to be doing at my age: going to college, getting a car, getting a girlfriend, getting engaged, etc., but I didn’t really have any identity. I found my identity at the bottom of a bottle. When I found opiates, I realized that they didn’t have the consequences of alcohol, and I just switched and never looked back.

At 22, I dropped out of college and started my own business with two other people. Within a year of my first opiate experience, I was a daily IV heroin user, and had to sell my company because I couldn’t manage it anymore. I had a nice house in a nice part of town and three cars, all of which I sold and ended up living in the “ghetto”, selling things at flea markets and stealing from Walmart to get money to get high. This continued for about a decade. I tried moving to get away, but I brought all of the internal stuff with me. There was not one external thing that I could buy or steal that could fix what was going on.

I didn’t recognize my opioid use as a problem for a long time. Then I started going to jail more often. In 2010, I got arrested with heroin in my car. Two years later, I got my first DWI. Then when I overdosed for the seventh time, I was arrested with the heroin I had on me. It was the same cycle repeating itself for ten years. Rock-bottom came about four years ago when I overdosed on my birthday at a Fourth of July Party. I was trying to stay away from drugs and alcohol at that point. I don’t even remember what happened or how I got there, but the next thing I knew I woke up to fireworks and my mom telling me that I had to leave.

I went to this shelter in North Austin and figured out the problem was me and there was no one that was going fix me except me. It was work that had to be done on my part. I went to meetings and listened, but everyone was talking about god and I couldn’t see the value in it, because I never needed it growing up. But I listened to people with stories similar to mine and they were sober. I couldn’t make the connection, but I listened for the first time in my life. I was receptive to the advice I was getting from people and doing the things they were encouraging me to do, and things got a little better for a while…then I stopped doing those things and ended up with a needle in my arm again.

After my last overdose, I started working at a treatment center in North Austin. I had six months sober. I got sponsees and I was always able to get people in pretty quickly. I was good at managing entry into treatment. When I relapsed this time, I had 16 or 17 months sober, but I wasn’t doing well internally, and I thought I had to “look the part”. I didn’t think you were supposed to feel depressed or suicidal when you were in recovery—so I got high again.

A friend of mine told me about Recovery Unplugged and offered to drive me there. At this point, I thought treatment had to be super regimented and 12 Step-based; I was expecting something along those lines. It was weird seeing how helpful everyone at Recovery Unplugged was, and how open, honest and different it was versus my perception. I had played music for a long time, but I never considered myself a musician because of some inferiority complex.

Recovery Unplugged helped me understand that I was a musician and there are connections to be made in this world that I would have never made with realizing that music is medicine. I knew there was something that I needed to do in order to express my creativity and play music, but it didn’t really open up until I went through RU and realized that music was my outlet. When I’m feeling like s&@t in recovery, I can sit down and play or listen to music and change my mood instantly. I had never used music as a tool in recovery before, now I do every day.