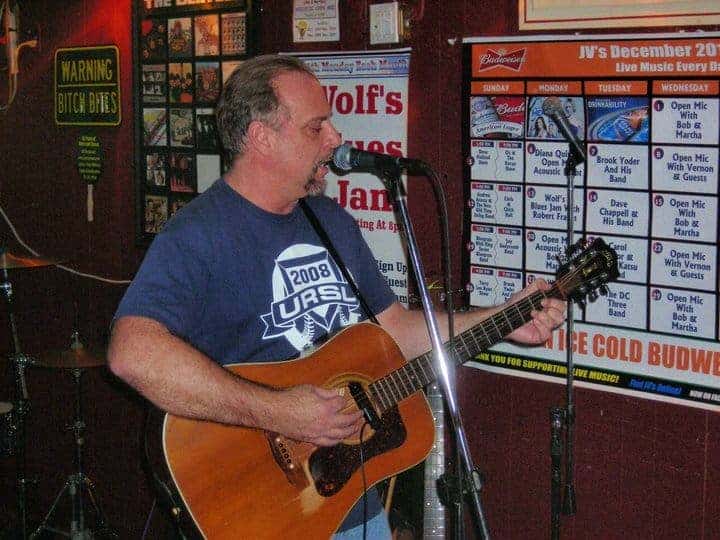 Although his matter-of-fact and casual demeanor may not show it, Philly-based songwriter James “Trip” Boyd is a man who has led many lives, through which the common threads have been music and substance abuse. Now, exceedingly content in this latest stage of life, and with years of sobriety under his belt, Boyd was good enough to sit down with Recovery Unplugged to discuss his tumultuous past, comfortable present and hopeful future. For all of its uniqueness and its many twists, turns and layers, Boyd’s story is one that could really happen to anyone, and that’s exactly how he tells it.

Boyd starts our conversation by discussing the accidental nature of the origins of his substance abuse which occurred, oddly enough, after quitting his high school basketball team: “My plan in life was to play on the basketball team and become popular, date a cheerleader and then go on to play in college. Then when I realized I was just barely going to make the team, that wasn’t good enough and I just up and quit. Literally a week later someone calls up and says ‘Hey you want to do hit of acid?’ and I just went from one extreme to the other. From that point on, the rest of high school was just a party.”

Boyd came to alcohol only after experimenting with other drugs, and confessed that he was an “equal-opportunity drug user”. After a few years of heavy partying and an ill-fated marriage, he found music as accidentally as he found drugs in high school: “Evidently I mentioned one night that a friend’s band could practice at my house and the next thing I knew they were all showing up. I ended up hanging out with these guys and booking gigs for them, moving equipment and running lights. Soon I started picking up instruments here and there.” Before this, Boyd’s only acquaintance with musical performance was a brief flirtation with bass when he was a teenager.

Eventually Boyd’s musical wanderlust moved him all over the southeastern United States, playing in bands in DC, North Carolina and Florida. This is when his substance abuse began to re-escalate, and he started with alcohol, marijuana and cocaine: “I was always around it. It was normal for me to smoke weed first thing in the morning. It was normal for me to drink.” Like so many others who experienced nightlife in the 1980s, Boyd also indulged in heavy cocaine. Eventually this lifestyle would take its toll on him and the seams of substance abuse began to show.

The chaos in Boyd’s life reached its pinnacle in the late 1980’s when he found himself living in Florida: “I was literally living Murphy’s Law. It was just unbelievable everything that went wrong in my life. I was really starting to become depressed. I was getting up and, first thing in the morning, going to the store and buying a six-pack and just getting drunk. It was just one of the darkest periods in my life.” Things took a more positive turn when an old friend reached out to Boyd and convinced him to relocate to Philadelphia, where he’s been ever since.

At this point, Boyd had just gotten into writing songs. After years of playing in cover bands, he decided it was time to lend his own literal and figurative voice to the vast American musical canon: “I wanted to do something original, but I just didn’t know how to do it. I was always just a member of a band. Finally when I moved up here, I said ‘Enough, I’m tired of playing in bands that were breaking up all the time.’ I wanted to do my stuff and be in charge.” Boyd’s declaration of musical independence led to the formation of a solo project called Trip Boyd, which included collaboration, on his terms, with other likeminded musicians. He became a fixture of the Philadelphia music scene , attending conferences and networking as hard as any local musician. He also became better acquainted with the recording process, a passion that has endured to this day.

As in other phases of Boyd’s life, however, substance abuse once again became a dominant presence. “I just never really succeeded on the level that I wanted to and I guess I just got frustrated and depressed.” This led to the resurgence of heavy drinking and cocaine abuse. “It was always someone else’s idea, but one thing about addiction is that you start crossing lines. Eventually I became the guy to say ‘Why don’t we get a little something?’” The lines kept getting crossed and eventually Boyd found himself working in a recording studio where drinking and drug abuse were commonplace. Boyd’s substance abuse continued to escalate and in the last few years prior to his recovery, crack became a regular drug of choice, although he says he never smoked it two days in a row. He describes his crack use as an irregular cycle in which he would use the drug in weekly or biweekly intervals.

In 1999, Boyd received a DUI along with a court-order to attend AA meetings. This is where things finally started to turn around. Like many who are compelled to attend recovery meetings, Boyd initially went only to satisfy the requirements of his court-order, but eventually started becoming more involved. Although he was still using crack, he describes one night that could be viewed as a turning point in his perception: “One night I’m home smoking crack and it’s like four in the morning. I had to be at work in four hours and I knew that the next 48 hours were going to be a living hell. There is no worse feeling than crashing from crack cocaine. All of a sudden I got this thought: ‘Hey you know these meetings you’re going to? Maybe you should try them.’ I got this feeling of peace. That is the one and only time that ever happened when I was crashing from crack.”

After another period of setbacks, Boyd finally found his footing. He describes the morning after the “white-knuckle night” when he finally resisted the urge to go back to crack: “It wasn’t ‘I gotta stop doing this.’ It was ‘I’m done’. I felt relaxed and calm and I’ve ben sober ever since.” He started increasing his attendance at meetings and strengthened his confidence in recovery, going through the steps, working his program and learning many lessons along the way. He even established a recovery-themed softball league. He was still playing in bands, but he had sold all of his equipment during the first few months of his recovery. “I was at a point in my life where it was time to do something different.” Boyd soon found himself back in college and traveling. He would not touch a musical instrument again for another eight years.

Yet another coincidence put Boyd music in Boyd’s path again. “I totally relapsed on music and found myself playing with Garage Band [the recording software]. Eventually I stared writing songs again.” Boyd reconnected with this old drummer, with whom he formed The Beavers, and started playing live again. They hope to be ready by spring to showcase new material and covers to their audience. Through deeper immersion in the 12-Step process, Boyd started taking behavioral health classes and closely examining the traditional tenets of AA. He continues to strengthen his knowledge of the process each day.

Much like his current musical projects, Boyd’s recovery is in constant forward motion. His story is a reminder of the fluidity of life and that, as much as we may walk away from music for an extended period of time, it will always be there to comfort and inspire us when we get back. Regarding the role that music has played in his ongoing recovery, Boyd had the following to say: “It’s been very fulfilling. I just get lost in it. I just love every aspect of it. Music is just what I do. I breathe, I eat, I record music.”