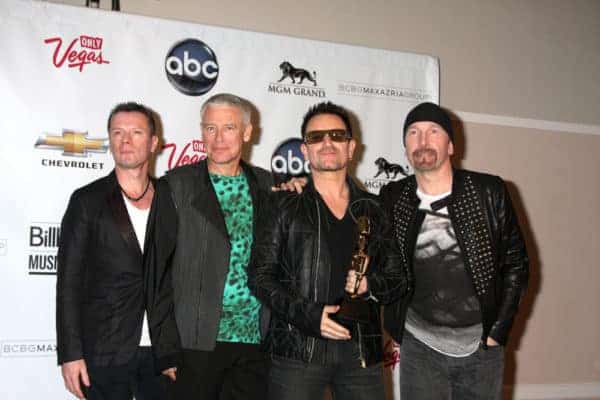 When we hear from U2 outside of a musical context, it’s usually from Bono, or in some rare cases, The Edge. Last month it was bassist Adam Clayton who was doing the talking as he was honored at this year’s MusiCares MAP Fund concert for his outspoken battle with alcoholism, a battle he has been successfully waging for years. MusiCares MAP Fund, which was established by the Recording Academy in 1989, has distributed more than $4.4 million to musicians in need, focusing much of their work on addiction issues. Clayton was presented the Stevie Ray Vaughan Award by Island Records founder Chris Blackwell at the event.

Among the artists who were there to celebrate the historic night with Clayton were Macy Gray, who treated the audience to a funked out version of “I Still Haven’t Found What I’m Looking For”; the Lumineers who rolled out their own rendition of “One”; and, of course, Clayton’s U2 cohorts, who closed out the night with a three-song set. It was a special and emotional night for Clayton, as well as everyone who has struggled with alcoholism or drug addiction, musician or not, and managed to come out the other end. During his remarks, Clayton discusses how Eric Clapton was there to give him a much-needed reality check after two particularly destructive episodes of alcohol use. He also discusses how Pete Townsend gave him critical emotional support five weeks into this treatment program.

Perhaps the most poignant part of Clayton’s remarks was his deference and respect for the recovery and treatment process and the recognition of the profound impact they have had on his life. The speech ended, predictably enough, with lyrics written by Bono; however, Clayton’s alcoholism and subsequent recovery remind us of two things: anyone can be affected by addiction, and anyone can recover from it.